So rich, juicy and flavoursome I wanted to keep eating, when watching 'Three'. And I don't think it was just me taken aback by the production either, the decision to stand at the end of the audience was unanimous.

If I'm being honest, Anna Niland is a force to be reckoned with. After seeing her last production of 'Pigeon English', I knew I HAD to see 'Three'. How on Earth could she top Pigeon English? Well. She didn't just top it, Three rocketed all the way over the moon. Niland clearly has a knack for making her actors look stunning on stage, playing to their strengths and bridging the gap between actor and audience.

I experienced emotions I didn't even think I could recall or empathise with. Before the play, if I ever read or saw something on the news related to the play's subject matter, of course I couldn't relate to that trauma. But something happened on stage that changed that and we audience members feel that we are all the same.

Of course, a director is little without their players, who were definitely unafraid of playing. Never have I ever walked into a theatre that felt like a nightclub. Three follows three sisters on the brink of the summer holidays.

Jaz is the rebellious middle child, old enough to remember the past and, as a result, is constantly rejecting whatever she has close to her. Which isn't a lot.

Whilst the baby of the trio, Tia, is excessively pampered and praised by her older sister Rochelle, who becomes both her Mum and Dad. Her hopes of a 'normal' life are shattered when both the dress and their false idealised interpretation of a stable family life is crushed. No one is safe and they can't go on covering the past forever...

The emotional maturity of older sister Rochelle, played by Alice Vilanculo is mesmerizing. Managing Rochelle's many spheres effortlessly, the soft tender cries in Vilanculo's voice were too real, I felt a domino effect of tears emerging from most of my row. Her sisters were also watchful and, as one of three sisters, I felt the passion, which can become overheating in the restrictive situations only sisters experience. Girl Power is the best power and

Kane Husband's delicately intertwined movement choreography assisted the conflict and cooperation sisters experience and also the feeling of being different... yet distinctly similar. The acting was done so truthfully, I could picture arguments at home where I was both the instigator (Jaz, stupendously performed by Courtney Spencer), the peacekeeper (Vilanculo) and yet the innocent bystander (frailly managed by Ikra Ali). We deserve more beautifully talented female parts in theatre and Sophie Ellerby's writing is a defining step forward.

Supporting cast were also as firey, enigmatic and physically booming, which is definitely part of the National Youth Theatre house style. Abby Russell's management of the bubbly, larger than life Rose was my stand out favourite. You weren't meant to laugh at this kind of play, but with Russell's exclamations, I think I found out the reason behind the sudden appearance of a six-pack this morning.

Raw, raucous and rowdy energy was a feature of this performance played by the National Youth Theatre's Playing Up Company, which I think is probably in the top two plays I've ever seen (with Pigeon English).

The only question I would have to the director is that, as Playing Up is a nine-mouth course for young people unemployed or desperately in need of qualifications for other reasons; I wonder whether the topics discussed were experienced by the cast? If so, perhaps a more challenging piece could have been chosen, to widen the actors's casting types and allow them to step into a world a lot more different than their own.

I can't wait to see what's next.

You (yes, you) have to see this play, you have Saturday night and Sunday night! 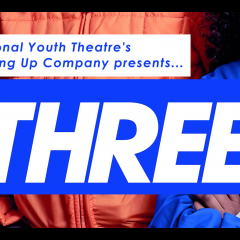