La La land, to me, was a musical masterpiece - the year's most striking musical experience. I was truly affected by this modern day musical because I think it deserves all the credit for its exceptional cinematography and 14 Oscar nominations.

I was truly affected by this idea that a new Hollywood film could portray the musical style of a great old movie. Chazelle effectively mirrors the dreamy nostalgic quality of old musicals in this harmonious dynamic portrayal of the present-day LA.

Linus Sandgren, the cinematographer, guided the narrative with soaring camera movements and the musical cooperation of Justin Hurwitz ( Film composer) and Damien Chazelle (director and screenwriter). The fantastical narrative of two struggling artists crushed by an abysmal reality was brought ALIVE with a striking instrumental soundtrack and CinemaScope-inspired splendour. The strategically musical compositions and on-screen camera movement were able to create a harmonious balance between reality and illusion. It was truly beautiful. I especially respected the seasonal transitions in the movie. It seemed the emotions were the catalyst driving the narrative progression.

The slow camera tracking and dancing in the observatory and concluding film montage scenes was really incredible (credit to Chazelle and the choreographer, Mandy Moore). Made up of stiflingly dreamy lighting and sweet melodic music, Chazelle managed to create what critics call a 'fantasy fantasia' - a relationship that embraces both love and fantasy.

La la land is an altogether divisive film; critics ever criticise or applaud it.

And where I believe Jazz fans should be championing a musical that gives attention to underrated art, some people criticise the film for its lack of diversity, especially as a film so heavily focused on jazz music. They feel that the film is self-indulgent and overrated, accusing Damien Chazelle of "ideological snobbery". It's also believed that Chazelle's cinematography is given more credit than it's deserved; the film is full of poor singers and dancers that make a mockery of the jazz community.

Instead, I agree with the critics' consensus on Rotton Tomatoes when they say that "La La Land breathes new life into a bygone genre with thrillingly assured direction, powerful performances, and an irresistible excess of heart." I ultimately believe that the musical is deserving of its five stars.

How is it comparable to Whiplash?

I've only watched the ending of Whiplash but already I can applaud Chazelle's incredible cinematography. There is something inherently military about the snare drum solo as Chazelle intended. It screams warfare, suffering, brutality, menace, and musicianship. Inhumanity. Ferocity. The tone is clearly established by dread and the underlying menace that permeates the scene is then personified by Andrew's sweat and blood. The fierce exertion of drumming and the self-deprecating failure performers feel is also established by imposing close-ups and rapid cuts and quick-takes. The frenzied succession of cuts extends the focus to the brass instrumental and drum sounds. Though the resolution and camera angling is threatening, the audience still somehow feel a sense of fulfilment. Pride. That's what I love about Whiplash's climax; the playful cinematography embraces suffering, exertion, and accomplishment. It's a beautiful musical experience that I feel has a similar intense musical dynamic to La la land. The framing and compositions in both films deliberately challenge reality, and music is always at the forefront, guiding the storyline. 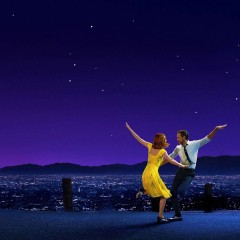 Damien Chazelle: The art of photography, camerawork, and film-making