We went to a local event at the Boiler room called Rock4Refugees, when we walked in the security guard drew crosses on our hands to mark that we were under 18.

We walked around outside first and they had loads of activities to take part in such as; face painting, drawing there was also a barbeque. There were tops which you could purchase which had the name of the event on with a picture also. There were cupcakes which you could buy, there was also a bar there which wouldn't serve you if you had a cross on your hand. We went inside and I filmed all round the venue, there were different people singing and different bands playing. There was also a promotional video to help raise money for refugees, around the inside there were fairy lights which made the place look really nice. Outside in the courtyard there was a massive graffiti board which people were spray painting, all they had to do was donate a little bit of money. The atmosphere was great, everyone was really enjoying the music, the food. People were dancing and singing along with the songs they knew; It was a brilliant event hosted by brilliant, inspiring people.

I shared the video and my experience by putting a video together of the event and uploaded it to the Kane Youth Project website. 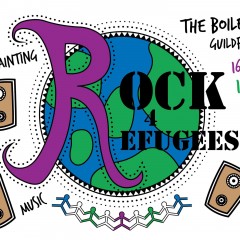 We went to a local event at the Boiler room called Rock4Refugees, when we walked in the security guard drew crosses on our hands to mark that we were under 18.