I didn't believe this show could work - boy, was I wrong.

Jon Gracey has theatricised a group card game, akin to Secret Hitler, where members of the audience must work together to kill either the villagers or the werewolves, depending on who they are.

The rules of the game are relatively simple.

There is one Seer, two werewolves, and everyone else is a villager. To start, everyone closes their eyes. The werewolves are then invited to open their eyes and identify one person they want to kill. They close their eyes again and the Seer is invited to choose any one person to see whether they're werewolf or a villager. Everyone then opens their eyes. The person killed is informed of their death and the villagers then decide who they want to blame for the deaths and subsequently lynch. The game is over when either both the werewolves are dead, or there are only two villagers left.

Although skeptical of how such a format would work, I was delighted to see it came together so amazingly well. A lot of trust gets put into the audience, who could very easily screw the whole thing up if they were that way inclined, but everybody embraced the need to not cheat.

It was interesting to watch the true tenacity and manipulative nature of people when any kind of competitive element is introduced, with children and adults both backstabbing and lying to an audience enraptured by the events unfolding in front of them. The narration and snide comments made by Jon Gracey really added to the sense of childish fun.

In the three games we played, the duplicitous werewolves hoodwinked the other players every single time. Tactically we saw both an all out shouting assault to try and swing key lynching votes, to sitting back and trying desperately not to draw attention to themselves. In many ways the latter technique worked better, as you then have the hilarity of the one overager villager trying desperately to plead his innocence having elected to kill a child.

The growing popularity of card and tabletop games are suggestive of a consumer tastes moving towards more interactive, low-tech entertainment. Gracey has demonstrated that these experiences can be successfully transferred to a live audience situation, and makes for a brilliant spectacle. I really hope we see more of these style of shows come out, as they are refreshingly great. 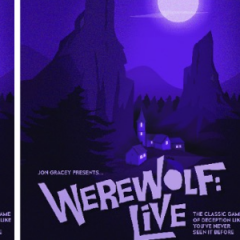 I didn't believe this show could work - boy, was I wrong.