A variety comedy show whose theme is the above and where the ever-revolving set of comedians let loose with their sexual stories.

Hosted by the exceptionally charismatic Robyn Perkins (top left), she boasted an impressive confidence and quick wittedness that allowed her to contend with whatever was thrown at her by the audience. Of this there was, perhaps unsurprisingly for a 22:15 show above a pub, a great deal. She took heckles from the very front row and the very back row and brought a Victoria Wood kind of openness to proceedings wherein there was no room to be coy.

First up was Valerio Miconi (top right), who I'd seen in my previous show, Comedy Sans Frontières. Here, he was demonstrably more unhinged. He stood at the doorway studying Robyn before his turn came and clearly ruminated on what from her opening he could harvest for himself and so took target on the hecklers. He then dove straight into a frank and far from vague pool of jokes about his conjugal life with what felt like a lot more jokes in his arsenal than he could fit in.

Next, Scott Adams (bottom left). He grabbed the microphone and surveyed the room with enough swagger to accompany his cockney accent. He followed with a barrage of rapid fire jokes, each and every single one of which paid off. Swoons of laughter came from his treatment of the hen party in the room, which provided enough ammunition for him that he managed to step around divulging anything embarrassing of his own. Cloying but brilliantly hilarious.

Third came Jenny B-Side (bottom right). It took this long for me to hear some musical comedy this year. Jenny took it back to basics by singing a ditty seemingly titled just Sex. Straddling a front row member while she did so was just par for the course in an undeniably well rehearsed and written set that means you have to see her perform if you have the chance.

Finally, it was the turn of Sarah Iles (bottom, Perkins' Chick Ass Comedy co-star. With an Adele-esque persona, having the superstar's accent and famous bawdiness, she was a deeply astute comedy storyteller. She wrung the final drops of entertainment out of the hecklers – who had, by this point, become surrogates as part of the show – by getting one on stage and all but propositioning him. Her sordid epic was the most memorable of the show as she re-enacted, word-for-word, an exchange between herself and a fling (played by the aforementioned heckler), which left the room quaking with laughter.

Catch Shaggers for some well-picked, mischievous and unburdened comedy! 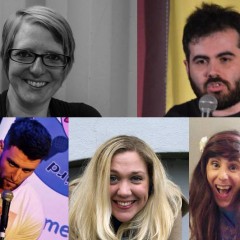 A variety comedy show whose theme is the above and where the ever-revolving set of comedians let loose with their sexual stories.