I have always admired children's performers for their enormous physicality. Twig the Pixie is less physical than, say, Into The Water but has the storytelling and stand up talent to carry a ferociously loud audience.

Mainly, Twig tells us a story about a troll who seeks acceptance from his townsfolk but after some of them play a nasty trick on him, he decides to get revenge on them for their trickery before realising that they aren't all like that. This harkens remarkably closely to the story of The Grinch Who Stole Christmas. Twig is also a peculiarly proportioned figure of green.

Putting aside the possible plagiarism, Twig plays a number of exciting characters with gusto exhibited with distinguished performances that help to tell them apart while dipping back into Twig's narration of the story. He filled up the cast of creatures with such figures as Miss Piggy and Sir David Attenborough, which, slightly dated for the youngsters, spoke to the children within their parents. This came in addition to the veiled, more mature jokes and jokes about the comedy process that went straight over the youths' head, and even one audacious, openly adult joke.

An epic story set in The Enchanted Forest told by a pixie about him and his friends requires some spectacle. Children's imaginations are unlimited and unburdened but become obscured without being pushed in a certain direction, especially if they're not familiar with some classical characters and stories such as Billy Goats Gruff. The Funsplosion's structure would lend itself massively to some wondrous and eclectic set and additional performers to give The Enchanted Forest some geography and the youngsters something to look at.

Twig got tiny audience members on stage to tell their own jokes, play their own tricks, and play games. He did this late enough into the show to ensure that most of them were comfortable enough to thrust their hands in the air for the chance at a turn in the spotlight. The highlight of these was a game in which the children had to answer questions with wrong answers, getting laughs from everyone in the audience.

Finish it off with a song and dance and Twig leaves you with all too many moments to remember the performance with. A must-see is rarely found. Twig the Pixie's Funsplosion is a must-see family show and more. 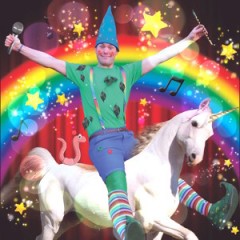 I have always admired children's performers for their enormous physicality. Twig the Pixie is less physical than, say, Into The Water but has the storytelling and stand up talent to carry a ferociously loud audience.