Two very different characters in an otherwise empty cafe, what could possibly go wrong as Buckle Collective introduces their first performance in the Brighton Fringe?

Lights up on Catherine (Nathalie Codsi), a bored and unhappy waitress who hates her job. Enter Mr Brockington (Jack Klaff), an upper class, rude, older man who is fixated on the loss of his daughter. Two very different characters in an otherwise empty cafe, what could possibly go wrong as Buckle Collective introduces their first performance in the Brighton Fringe?

Throughout the performance we see both characters fade away from the present, lost in their memories, barely communicating with each other, if only to discuss the weather. Although we initially witness their first judgements of each other, we soon see similarities between the two emerging through the dialogue.

It is clear throughout the first twenty minutes, that this is all leading to a twist. Unfortunately, the direction of the script clicked about thirty minutes in. With hope that I was wrong I continued to watch as the plot unfolded into the cliche I had guessed and was disappointed when the play ended exactly as I was expecting. With a few changes to the dialogue, the audience could have been left wondering for much longer.

Lengthy monologues chock-a-block with descriptive language seemed to cause issues for Klaff as he struggled with the lines, pausing for longer than needed, stumbling and often causing the point to drag out and lose my attention. Codsi's fast paced lines and quick humour stood out in contrast, giving an impressively solid performance unphased by her co-star's problems. She switched to new characters without a flicker of hesitation and truly shined as the star of the performance.

As a new addition to the Brighton Fringe, the piece has potential and could be much improved with some more rehearsal and tweaks to the pace and rhythm. However, with Codsi standing out in my mind, I can't help feel that this production would work wonderfully as a one woman performance, allowing us further into her thoughts and leaving the twist to be discovered closer to the end. 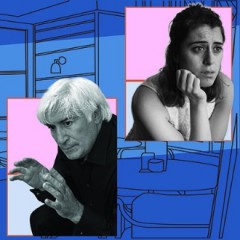 At the Junction Cafe

Two very different characters in an otherwise empty cafe, what could possibly go wrong as Buckle Collective introduces their first performance in the Brighton Fringe?