Voice MagReviewsCabaret from the Sha…

Cats, the royal family and a banana, CFTS was definitely an experience.

The Brighton Fringe Reviewers Hub called Cabaret from the Shadows: "A roller-coaster ride in the fairground of your mind."

An exploration of the human psyche, the cast emerge on stage dressed in steampunk fashion and clown-like makeup to make quite the first impression as they sing the opening song "We have come to read your mind…"

The cast present several scenes, tied together by their clown-like weirdness and dark humour as they play with the surreal. Describing themselves as "shameless", the international grouping merge each scene with a blend of dance, music, bouffon and clowning. The musical skill of the cast created a unique soundtrack used throughout the performance. If you've ever wondered if someone could play the harmonica whilst in a strait jacket or what it would be like to be serenaded by a chicken, the answers are in this production.

An hour in length, as the performance continued, I admit I found myself slightly lost. As if on a physical roller coaster, the piece changed direction, sped up, slowed and almost came to a complete stop at times, jumping from sketch to sketch increasing in absurdity making it hard to keep up – though perhaps that was the aim of the performance.

With firmer artistic direction and a clearer overall narrative arc, the piece would stand out better in the minds of the audience. With such a vibrant cast it would be easy to increase the comedy further and really get us rolling in our seats. 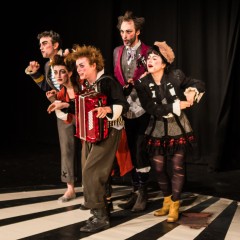 Cabaret from the Shadows

Cats, the royal family and a banana, CFTS was definitely an experience.