Barred Freedom is a play about the lives of two inmates and their interactions with each other upon finding themselves locked in a cell for hours on end.

Barred Freedom explores the contrasting situations of two prison inmates, one first-timer who is struggling to adapt to life on the inside, and one seasoned expert who's planning a 'foolproof' escape. Written as gender-neutral, the play was performed at the Cockpit Theatre by both a male and female cast, who alternated nights. I saw the female cast's closing night, and was both surprised and impressed by the performance.

The plain, simple set, which consisted of a black wall and door frame, a bunk bed, a table and two chairs, was well used by the actresses despite being a very small space to work in, and the monochromatic colour scheme served as a reminder of the dull nature of prison life. The actresses' light blue dresses stood out as a result, making them the focal point in a subtle and clever way.

The majority of the play was just two actresses on-stage, talking. There were no scenes, no set changes, hardly any lighting or sound effects, and only the odd appearance of a third character to break it up. Although I found myself occasionally glancing at my watch, there were long periods of time when the actresses managed to sustain a good presence and energy and hold the audience's attention, which — considering the lack of help they had — was impressive.

I loved the fact that the dialogue between the characters was very realistic and had a natural flow, as I think it's very difficult to write naturalistic conversation for the stage. There were moments of light humour which broke up the heavier topics addressed, and the clever use of silences made the loud, explosive moments more striking. Unfortunately, one of the actresses had her back to the audience for almost all of her most expressive and emotional speech, which was a shame as I would have liked to see her facial expressions.

The third actress, who played a brutal, rude security guard, was only onstage briefly, which was a shame as I didn't get much insight into her character. I would have liked to see more of the interaction between the guard and the inmates. The actress who played Dawson was very believable and her character was likeable; the character of Wentworth was slightly more irritating, but also endearing at times. Despite the fact that they were criminals, I still found myself liking and pitying them, which was a strange sensation. It should have felt uncomfortable, especially relating to a murderer, but perhaps spending so long with such a deep insight into their characters showed me that criminals aren't necessarily bad people. The topic was certainly a fascinating one, and made me consider prison and criminality from a different perspective.

I would have really liked to see the male cast perform the play as well, as I think it would have been really interesting to see if and how the dynamics between the characters changed, as well as the audience's perception of them. Overall, I really enjoyed the production and I found it refreshing to see such a simple piece which relied almost entirely on the actors' considerable skill. 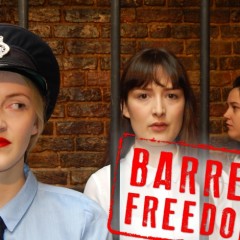 Barred Freedom is a play about the lives of two inmates and their interactions with each other upon finding themselves locked in a cell for hours on end.