As a founding member of comedy group Monty Python and celebrated for revolutionising the travel documentary genre, Michael Palin remains at the forefront of the British identity.

An older audience gathered to listen to Michael Palin at York Literature Festival. Here is a man who has visited an impressive 89 countries and is the writer of numerous bestselling books. Yet he is still best admired for dressing up in a checkered shirt and yodeling about lumberjacks.

Monty Python remains an integral part of modern British culture. It permeates through almost every sketch comedy program to date – a true master class in comic timing and fun. Flashback to 1969; the Beatles are breaking up and Monty Python first aired on the BBC - it seemed the circle of life was in balance. As Michael Palin walked onto stage at York Literature Festival oozing charm, intelligence and wit, it is easy to see how Monty Python have left such a stamp on the nation's hearts.

Name-dropping anecdotes to rival Tom Jones, Palin's confident stage presence and boyish giggle wooed the audience into a glorious sense of nostalgia. Palin continued to revel in the atmosphere on stage. Having been a key donor to the Globe theatre, he admitted, "I love being in front of an audience. It's live and it can never happen again."

Palin is also widely admired for his travel writing and documentaries. Voyaging across the world from Eastern Europe to the Sahara Desert and even the North and South Poles, many regard him as the nation's favourite travel companion. His honor as the Commander of the British Empire (CBE) in 2000 may just prove that correct.

So for a man who has travelled the world in 80 days and written one of the most loved comedy productions of all time, what is the one thing he wouldn't travel without? "A sense of humour". 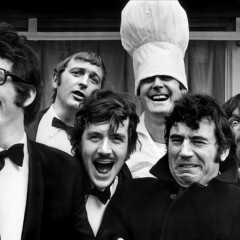 As a founding member of comedy group Monty Python and celebrated for revolutionising the travel documentary genre, Michael Palin remains at the forefront of the British identity.