"And, when you want something, all the universe conspires in helping you to achieve it."

Sauntering into the Pleasance Theatre after a journey of trudging the rain, the warmth confuted my dreary mood and the prospect of watching theatre seemed a bit hit or miss. The show? 'Maktub'. The story? An epic, allegorical recount of young Andalusian shepherd Santiago's quest to the treasure-promising Egypt- in order to find out the reasons behind his prophetic dreams. Or, if you're a literature buff, an adaptation of Paulo Coelho's internationally acclaimed novel 'The Alchemist'.

Did I forget to mention that the theatre company behind 'Maktub' are Complicite, an industry leader and Edinburgh fringe favourite; known as '… the most influential and consistently interesting theatre company working in Britain' (The Times)? Alongside the cast of the Royal Central School of Speech and Drama … the expectations were higher than my body temperature (and general mind capacity) at this point. I had to see, first hand, how good they were.

They did not disappoint at all.

With the soft, serene notes whirring across the theatre room from the jovially dressed guitarist greeting the crowd- it was clear something intense would happen. Not overpowering, but a perfectly placid backdrop to compliment the gleaming talent of the well-sculpted ensemble. Cast multirolled throughout this play- maintaining intimacy with the audience, themselves and the story. All actors rose to the challenge and their ability to dress and undress themselves into colourful characters was effortless. Even the costumier, Bethany Wells, followed the theme of preserving the low production effort about the show- keeping all props simple, to really showcase the talent of these exceptionally good graduates. A special commendation has to be given to the mesmerising Rakhee Sharma who totally stole the show. I could watch her everyday as she honed the mystic of the fortune teller, to the stubbornness of the close-minded crystal seller to the youthful innocence of the young lover Fatima. A 'star' student has been born.

Of course, perfection is never easily obtained and although the high-profile names should suggest a lack of criticism, esteemed director Marcello Magni's extremely clever direction was definitely a force to contend with. My favourite moment was the market stall scene at the beginning, which arose the caricatured (yet oddly accurate) perceptions the audience would have of an Arabian market- with erratic sellers frantically reaching out to the audience, desperate to make their income for the day. Then juxtaposed with Santiago's heartfelt soliloquy about love, "When we love, we always strive to become better than we are. When we strive to become better than we are, everything around us becomes better too." I loved it. But, after some consideration, I think because the play is set in so many towns/villages, a different technique could have been used to signpost the story.

Overall, I am incredibly disheartened that I cannot see the other treasures in the 'Studio Season', which accompany Maktub. However, if the standard of this debut is anything to go by- I'm sure we'll be seeing more delectables from this dream team very soon.

Complicite is an Arts Award Supporter. You can see their profile here. 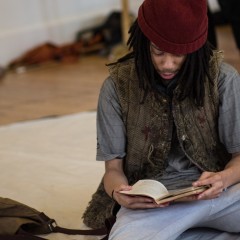 'Maktub' at the Pleasance Theatre

"And, when you want something, all the universe conspires in helping you to achieve it."