John Wick: Chapter 2 A.K.A John Wick: Headshots galore. If you are looking for a film with over the top action sequences and property's mythology and lore in fascinating ways then this is the film for you.

Chad Stahelski is able to bring carnage of shootouts with the use of a longer running time, bigger budget and a narrative driven film which is something which audience have hoped for.

John Wick (2014) (Keanu Reeves) is a retired assassin, brought back with revenge after his dog is killed by Losef Tarasov (Alfie Allen) who also stole his car. The narrative? It was a gift from his dying wife (Bridget Moynahan). After the killing Losef Tarasov (Alfie Allen) and his father Michael Nyqvis (Viggo Tarasov), John Wick: Chapter 2 takes off from the ending of the first film.

The story of John Wick: Chapter 2 is that there's a new villain, an Italian mobster called Santino, played by a disappointingly robotic Riccardo Scarmacio, who hires Wick to kill off his sister in order to obtain power as all action movies trope villains would want.

Chad Stahelski finally gave the audience the background story of what actually happened to John Wick (Keanu Reeves) with the impossible task he was given by Michael Nyqvis (Viggo Tarasov) in the first film. The Continental which is the underground organisation for all hitmen, Chad Stahelski allows the audience to go deeper of what the rules of the business actually are. The rules remain clear: when inside the Continental Hotel – the killers' boutique hotel owned by Winston (Ian McShane) – not a drop of blood is to be spilled, or the wrath of the organisation will descend upon you. When a blood oath is made, you will have to keep your side of the bargin or pay the price.

As John Wick (Keanu Reeves) refuses, Santion (Riccardo Scarmacio), takes it into his own hands to blow his house with a grenade launcher. Another feud gets off the ground, with the price on John Wick's head soon ballooning to lottery-win proportions of 7 million USD.

John Wick Chapter 2 is always visually engaging. In the world of John Wick, no one ever walks past anything boring. The use of colour is eye catching and lively. The juxtaposition of white background in certain sequences and the colour red of the mayhem that Wick leaves behind is satisfying visceral.

The villains in the film do not get enough screen time however; it is visible to see how each villain is in regards to their motivation and who their loyalties lay down with. This is whether Peter Stormare's delightfully sleazy, cigar chomping mobster or Riccardo Scamarcio's Santino, an immaculately dressed greasy cherub, all tropes which Chad Stahelski does well to implement into the film.

The action sequences do not disappoint as the body count for John Wick: Chapter 2 is a whopping 128, almost double for its predecessor. Several weapons were used such as Glock 17 & 26, AR-15, Benelli M4, fists, Knifes and even 'a fucking pencil' which audiences can appreciate the execution of both kills using a pencil.

The hall-of-mirrors showdown, inside a contemporary video-art show, gives you loads to look at even when the personnel involved are a tad second-rate.

John Wick: Chapter 2 ends with John killing the main villain…inside the Continental thus breaking the rules of the organisation which results in death. However Winston (Ian McShane) has a soft spot for John Wick (Keanu Reeves) and gives him an hour to get away but must hold down the rules as allowing a contract to go international causing John to run for his life. It is an open ending which I am sure most audiences would appreciate for a third installment of the franchise.

Keanu Reeves' John Wick is elegent and stylish through its lighting, cinematography and choreography form of Gun-Fu that is not short of giving audience an action film to remember. The great match of characters from casual agents such as Charon (Lance Reddick) executing the role perfectly as the Continental's disquieting receptionist or Aurelio (John Leguizamo) the autoshop god or villains such Cassian (Common) and Ares (Ruby Rose). This makes the genre triumph in the art of film making and if this is how the sequels will turn out, roll on Chapter 3 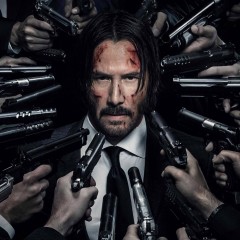