As 2016 went along, immigration became a hotter and hotter topic in the UK. For Read A New Book Month I took on The Good Immigrant.

In June, the country voted to leave the European Union. In September, The Good Immigrant was published and with it, eyes opened. The Good Immigrant, edited by Nikesh Shukla, brings together essays from 21 writers from Black, Asian and minority ethnic (BAME) backgrounds, sharing their experiences of being immigrants or the children of immigrants to the UK.

Overall, it addressed the feelings of acceptance or rejection into the country's culture, and how multiculturalism is shaped to categorise people as being either good immigrants or bad ones. The synopsis explains how British BAME people are seen as 'bad' immigrants, "job stealers, benefit scroungers, undeserving refugees" until "winning Olympic races or baking good cakes, or being conscientious doctors" makes them the 'good' kind. In the current climate, white British people are considered to be the arbiters of culture and behaviour and to divert from that is to be reclassified. This book acts as a heavy weight on the ever-shifting scale of multiculturalism.

The writers divulge times they were made to feel unwanted and 'other' in the country they call home, in many cases the country in which they were born. It ranges from standard vitriolic racism, to being the 'token' brown person ('What We Talk About When We Talk About Tokenism', Bim Adewunmi), and having to fake themselves in the professional sphere to be the 'model minority' ('Beyond 'Good' Immigrants', Wei Ming Kam).

Chimene Suleyman highlights the appropriation of aspects of cultures that come from outside the UK; belittling people of colour and the things culturally important to them by taking them without credit as well as a pressure to reject aspects of themselves to fit in. "Standardisation is the backbone of the British Empire," he writes in 'My Name Is My Name'. Exploring the gamut of the world's immigrants, global citizens, and their problems paints a ferociously colourful image of how people of colour feel white people, those who live the universal experience, see them – as 'other'.

'Yellow' by Vera Chok analyses the categories of ethnicity and how the umbrella terms like Asian or African are small-minded and attempts to break down where and what cultural and geographical boundaries are.

Sarah Sahim writes incredibly passionately, almost angrily in 'Perpetuating Casteism' about the perpetration of caste and class discrimination left as a footprint of colonialism. Salena Godden's poetic essay, 'Shade', is a perfectly vivid prayer for open-mindedness and community despite having to "tick 'Other'" on forms to this day.

In 'Flags', Coco Khan delves into the fetishisation of people of colour following a one-night encounter with a white guy who, on seeing his room's decor, she thought to be a nationalist but just turned out to be patriotic. The 'I've never been with an Asian' kind of discourse was one kind of subjugation felt by BAME people in this book that is rarely heard about. This in amongst writers from communities that generally find it hard to talk about sex makes the essay a deeply personal and brave one.

The Good Immigrant signifies yet another reason why Riz Ahmed was on top of the world in 2016. He released music individually and as part of the Swet Shop Boys duo. He is nominated for a Golden Globe for leading the hit HBO series, The Night Of, and of course he starred as Bodhi in Star Wars: Rogue One. He wrote 'Airports and Auditions' in which he chronicles the difficulty he still suffers travelling across the world as one of the world's most promising global actors. Racial profiling and discriminatory pat-downs are the norm if you dare to pursue the life of an artist of colour.

The final essay of the book 'The Ungrateful Country' by Musa Okwonga delves into the ever-present issue of representation of our society in the media and the systemic, institutional racism that leads to the monochrome. She admits to finding racism 'boring', and much of the poise and, often, humour with which The Good Immigrant is written would demonstrate that many of the writers agree. It is tiresome and a blunt irritation. But few people have that luxury. So many feel a searing anger towards the prejudice and discrimination and this book brings those feelings to the surface. They explain their positions, and counter them by playing devil's advocate, though confirming a deft ignorance that, like a parasite, infiltrates our thinking, nowhere to be found and impossible to eject.

At the same time as being hilarious and revealing, it is infuriating and confusing as a perfect antidote for the visible legitimacy being afforded to bigotry but neglecting the prejudices experienced in amongst BAME groups. It would be salient to explore the hypocrisy of people who discriminate despite having been discriminated against.

There are too many revelatory pieces in this book. With each chapter I found myself learning more, oddly, about the experiences of writers of colour like myself. They all deserve to be taken as equally important. It highlights the modern day prejudices that are faced by people of colour regardless of the efforts and sacrifices they makein order to assuage the people who complain about the terms on which they integrate.

The book's editor, Nikesh Shukla, had the idea for the book after reading a comment on an article in The Guardian and encompassed the "constant anxiety we feel as people of colour to justify our space, to show that we have earned our place at the table." 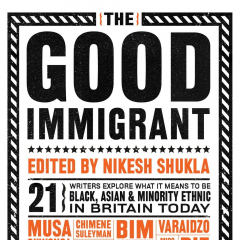 As 2016 went along, immigration became a hotter and hotter topic in the UK. For Read A New Book Month I took on The Good Immigrant.