If you are not aware of how Hamlet ends, I'm sorry to spoil it but everyone dies.

Bodies scattered all across the stage showcasing Denmark's royal family dead from one bloody encounter. At the Hen and Chicken's Theatre, how can the Theatre of Heaven and Hell make this catastrophe hilarious?

It's not exactly the cheeriest of tales but, ironically, there is something quite funny about a play where every character - even the servant, Osric - dies. Perry Pontac has made a comedy out of tragedy and 'The Theatre of Heaven and Hell' has breathed new laughs into this masterpiece.

Enter a happily holidayed Danish courtier Seltazar (Darren Ruston), with duty-free tequila under arm to the stage; interrupting the funeral music. Unaware of the bloody ending to the original, he learns of the deaths of Hamlet, Claudius, Gertude, Ophelia and even Osric! The only person left is bookish court librarian Fornia (Elena Clements), who has to use her clipboard to extensively list all of those dead. The question remains, who is the next rightful King of Denmark?

The accessible first piece from Perry Pontac's 'Codpiece Trilogies' resembles 'Pyramus and Thisbe' as performed in A Midsummer Night's Dream in the sense that the plot itself is vague but captures the Bard's greatest hits in terms of references and stylistic features. With references to Friar Lawrence and Macbeth amongst others, you do not have to be a literature buff to find yourself chuckling at how cleverly it's all interwoven together. Michael Ward's vibrant cast themselves find the humour in Shakespeare's more tedious features: flowery language, drawn-out bed speeches and soliloquies in front of the other characters (which they magically do not hear, despite being two metres away) which we put up with because it's Shakespeare. My favourite Bardian term 'sepulchre' makes an appearance too in the most hilarious context imaginable. All performed in polished iambic pentameter, alongside that ethereal RP Shakespearean accent means we actors slightly possess the 'green-eyed' envy.

I was drawn to how tight-knit and connected the four cast members were. As Clemets' Fornia and Ruston's Seltazar formed a love-hate relationship, the evolution of this was amusing and it was a crime to not to laugh at Brian Eastty's scene-stealing 'sepulchre' tone. Crawling onto stage like an ape was Nicholas Bright's Fool, possibly the world's worst entertainer. Pontac was clearly highlighting the frustration towards the Fool in Shakespeare. Being intelligible for a modern audience and offering no solutions, we find humour in the absurd words he does speak. A meaningless role through which Bright's fantastic energy shines through, he wears such a wondrous costume that I'm slightly perplexed as to where you could buy one nowadays.

Having a running time of 45 minutes, I returned home with a glowing smile and was amazed how funny something with the name 'Hamlet' could be! An exceptional cast and brilliant production with minimal décor but maximum quality. Good luck with the next production of the late Dario Fo's 'ONE WAS NUDE AND ONE WORE TAILS' and you should definitely follow their Twitter for more. (https://twitter.com/theatrehell)

In terms of deaths, well, it is Hamlet after all... 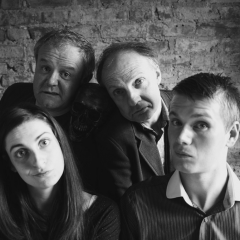 Hamlet Part II at the Hen and Chicken's Theatre

If you are not aware of how Hamlet ends, I'm sorry to spoil it but everyone dies.