Voice MagReviewsKing Lear at the Bar…

'Nothing can be made of nothing.'

King Lear, arguably Shakespeare's bleakest play, has now been brought to London by the Royal Shakespeare Company. Shakespeare tracks Lear's story, an ageing monarch who divides his kingdom between his three daughters but disinherits his youngest Cordelia, because she cannot profess her love for him. She says nothing, triggering Lear's older daughters to conspire a plot to steal his remaining power, a plot mirrored with the Earl of Gloucester and his sons.

Although 'nothing' is said 34 times in the play, I felt that Gregory Doran's minimalist production inadvertently left me feeling empty. Don't get me wrong, I am in no way able to criticise the RSC, but I felt that the production fell flat.

Minimalist décor to showcase the actors is an excusable emptiness, which designer Niki Turner achieves with white backgrounds joined with a single tree to create the Dover cliffs. In fact, the use of gold celestial discs and Lear's ostentatiously majestic glass box are an incredible visual contrast to the poor Bedlam beggars scattered onstage. But, what was with the storm scene? The catharsis of the play, sees a large gold plastic sheet covering the stage amongst Lear being lifted up, almost like in 'Wicked'. The lack of rainfall and the distraction of winds makes Lear laughable and incoherent.

However, acting that makes you feel 'nothing' is inexcusable, especially considering that the RADA alumni clearly had talent not being utilised effectively. The actors were clearly directed in a way to see cold, harsh and icy in this deranged universe with gritty iambic pentameter at the core. Anthony Sher, veteran Shakespearean legend, is all over the marketing campaign; but I felt his voice was gravelly, flat and repetitive. There was a mechanical, monotone element across all of the actors, which took away from the emotion of the play. So the famous ending, which Samuel Johnson said 'shatters the foundations of faith itself,' was laughable as the audience giggled at Lear's famously painful 'Howl! Howl! Howl!'. Even the most recent Hamlet, Paapa Essiedu as the scheming Malcontent Edmund, felt absurd. He was told to face the audience, but it felt like Essiedu himself was judging his character with a weird childish whine in his tone which felt irritating.

Cordelia is Lear's 'joy' and the fact that she lives should 'redeem all sorrows'. I did not find anything light within this production, except maybe that captions were shown, because otherwise there would've been misunderstandings.

The whole production never really breaks out of the clear box seen at the beginning. The 'lighter' characters, like the Fool, too lack a raw vitality. 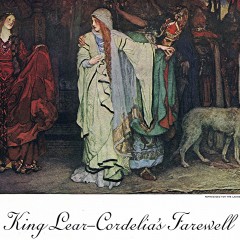 'Nothing can be made of nothing.'