Voice MagReviewsRe-Code by Man Made…

'I'm left alone on the side banks, waiting to be good at something enough that I am not always last.'

The struggles of dyslexia, the learning difficulty which affects a person's ability to learn, read and spell, are unfelt by the majority of the population. The 10% are constantly enduring a mind battlefield, where it is difficult to move past that almost irrevocable ghoul which manages to prevent some children feeling equal to their unknowing peers.

Man Made Youth's short film Re-Code was created in conjunction with the Random Acts scheme, celebrating the work of England's early-career filmmakers and artists. Once again I feel the word 'compelling' sums up my experience of the film, which uses the monochromatic greyscale throughout the piece to showcase that a dyslexic individual is indeed an individual and stuck in a dark world, neglected of the colourful happiness other children feel. I like this simplicity and feel it creates a powerful piece I'd be definitely be proud of. The fact that the location is simple and obscure in itself again showcases the idea of being trapped in a bubble where no-one else can get to, this leads me to imagine how a dyslexic person feels.

The ambient sound effects of cars nearby alongside the simple, natural attire of the protagonist complement the idea that there should be something welcoming about such an ordinary, 'safe' place... but there is not and unless we were trapped in that mind battlefield as well, the audience would still feel isolated yet somehow connected to this seemingly distant world.

Sipho Eric Dube has been cleverly cast as the main protagonist in this piece and I adore this casting decision. To an audience, Dube is the polar opposite of the idea of what a dyslexic individual looks like that we are exposed to on screen. Dube is physically athletic, tall, bold unlike the archetypal weak wallflower we have come to expect. Director Jerrel Jackson is clearly projecting the idea that these sorts of learning difficulties can affect anyone and that we need to be more accepting, as a society, towards those deceptively strong individuals wearing a mask, hiding the struggles they face within their mind.

A talented dancer and spoken artist, Dube is tense yet provocative, expressing almost suicidal ideas onto his audience. He performs dynamic, jaunty, almost lyrical steps as he struggles to interpret the complexities in his mind. On one hand, the film is very introverted and they could have used movements which use more space, however the subtlety with which the film progresses enables us to see that these are captured when Dube's strength multiplies and he becomes a taller, stronger and more confident soldier after having to break through. High angle lighting at the end symbolises his new hope and, after the tense beginning expressed through rhyming couplets, we are relieved to see this new star emerging.

Overall, the creative team behind Man Made Youth should be thrilled with this moving piece. Simple locations, costumes and couplets are combined with dynamic ideas to create an incredible piece that festivals need to see. A look at him navigating the minefield of school life could have engendered the emotive response needed for the character. However, well done Man Made Youth I can't wait for your follow-up. 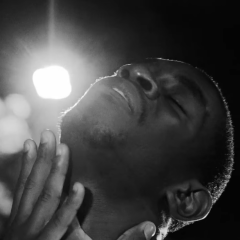