From Random Acts Midlands, Danni Spooner's experimental short film may appear strange, but it is nothing other than a "rebellious reflection on the cis-gendered society we exist in."

On the "strange" side of things - seeing two men and one woman, dressed in the same wigs and nothing else but high heels, underwear & makeup, marching on the stop smoking electronic cigarettes will certainly make no sense upon first glance, and it can be especially intimidating with that droning sound in the background. It will make you think "what on earth am I watching?". However, all you have to do is watch it a couple more times for you to understand.

Clearly, FAG isn't meant to be a family friendly affair for all. It was made in order to shock and make people think. Of course, the most shocking part was that the three nameless characters in the film were all wearing the same makeup. The camera shots also adds to the strange factor by focusing on the blurred lines i.e. hairy stomach, a faint moustache above the painted lips, the snail trail. It's not what you expect with a beauty model we typically see dressed like this, considering we're used to the clean-cut images in many fashion adverts or catwalks.

But look around you, in today's fashion websites, magazines, we are bombarded with models with the same hair, same facial expressions, same six-packs, same revealing clothing, the same makeup. They all look somewhat similar, don't you think?

FAG is a statement on the culture of beauty - no matter how much we preach and beg for diversity, we're always going to be our own hypocrite, as we can just about accept a woman with perfect qualities, but we still can't accept a transwoman. People who might initially think this clip is ridiculous, are told to look around at a screen culture that so desperately wants to celebrate individuality and diversity, yet we're limited by what society wants us to be, not who we want to be. 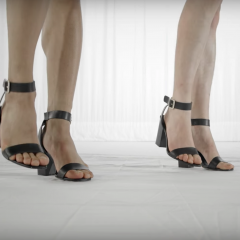 From Random Acts Midlands, Danni Spooner's experimental short film may appear strange, but it is nothing other than a "rebellious reflection on the cis-gendered society we exist in."