You have the right to remain silent! But this energetic, multi-award-winning three man comedy will keep you far from it. Set in 70's/80's America, this buddy cop parody will have you laughing throughout.

You have the right to remain silent! But this energetic, multi-award-winning three man comedy will keep you far from it.

Set in 70's/80's America, this buddy cop parody will have you laughing throughout.

Their skills as actors were stretched as the three had to believably perform a multitude of characters and accents, which they all did successfully, with slick quick costume changes down to a T.

The opening scene jumps straight into the action with thick accents, and equally as thick moustaches. Young Jimmy (Zachary Hunt) promises his dying brother to become "the best Police Cop ever", which after years of training shortened down to a well-choreographed montage involving shirt ripping, the star spangled banner and a guitar solo, he tops his classes and becomes one of the best Police Cops the force has seen.

Under the order of Officer Malloy (Nathan Parkinson), Jimmy is given the task of bringing in the infamous Mexican drug lord Hernández – who dons a very catty disguise – but first must track down a retired Police Cop legend to aid him in his mission.

Once found, Jimmy persuades hesitant and hardened ex-Police Cop Harrison (Tom Turner) to help him on the case.

Montages, memorable one-liners, and action packed physical theatre – physical to the point of something that 'The Full Monty' would be proud of – are used to display Jimmy and Harrison's adventures together in the build-up of cracking the Hernández case, andtheir friendship.

Fighting crime as a dynamic-duo, the pair become household names and heroes to the American people. Fame comes at a cost however when they are found taking loyalties with their new found stardom which,long-story-short, doesn't end well for them.

When all seems lost, Jimmy is given some advice from a familiar face in the form of a Heavenly ghost, which is the show's underlying message; to not be the best'what you're expected to be', but to be the best 'YOU' you can be.

The occasional corpsing from the performers can easily be overlooked, given the atmosphere they had set within the theatre, and that the audience found the jokes equally as funny.

Over-the-top choreography, cheesy jokes, and all-familiar clichés would usually fail a performance, but with Police Cops they manage to pull it off by milking it, only adding to the hilarity.

The enthusiasm of the performers alone is a good enough reason to watch it, in my eyes, but be warned – if you're looking for a taste of America, you'll be fighting to catch a breath between each joke. 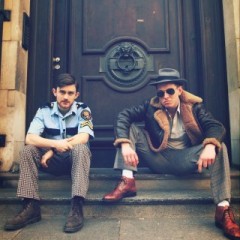 'Police Cops' by The Pretend Men

You have the right to remain silent! But this energetic, multi-award-winning three man comedy will keep you far from it. Set in 70's/80's America, this buddy cop parody will have you laughing throughout.