Justin Bieber has hit the UK with his 'Purpose Tour', but what did Arts Award Activist Kheira think?

I have never attended a concert.

Till recently, where I was offered a free VIP ticket from the sis [thanks!] to one. Win, win.

Young and younger girls were seen strutting into the O2 in their cliques, almost Mean Girls reminiscent. All dressed similarly and attempting to make walking in heels look less like a calf and more like a gazelle. Ah, it seems I was in the right place.

Before I continue, I would like to stress that this was my first concert. Ever. So, the unknown quality of the sound blew me away even before the concert. Those casual 'waiting' songs were ramified, knocking on the door of the inner raver within. There was something enigmatic about it, it was so loud and ramified, but so awe-striking at the same time. I couldn't help but dance, 'what's she doing dancing he hasn't even come on,' was overheard. Of course, the sound animates to the songs, giving them life which is not achieved on a standard iPod. Although the support acts were there to support and, well, not really be acknowledged... they followed the stereotypical boy-band format of too much bouncing around, head bobbing and modelling half broken voices. The O2 still made it sound great though.

On to the main event, Mr Justin Bieber himself, late. Considering his attire of just a hoodie and jeans, it was clear to say he wasn't late in costume. Beliebers out there, I have to say that after the show, I don't think I would have actually paid money to watch him perform. Everything was arguably 'barely there' and very half-hearted, he could've just walked off the street and onto the stage. The 'barely there' stage with just a glass box for transportation, alongside some attempts at hip hop, I felt there was a large amount of Bieber 'holding back'. Obviously singers cannot belt out into head voice every night, but as a paying customer I would have felt robbed as the production quality had failed to cover up the fact that after the first few songs it was all recorded. Even when the words 'Single ladies put your hands up!' were echoed, the audience noticed that Bieber had his microphone down from his mouth, in his hands! Magic! Again, is it an image thing to look a bit 'too cool for school'? It's a bit of a shame because I felt his voice has matured and is showing promising signs of a rich resonant tone, especially in his acoustic version of 'Children'. He did sip water on stage after the first ten minutes this stopped occurring, signalling perhaps that he forgot or he was not singing. Dancing was a similar story and I'm sorry but he cannot dance for toffee and the skimpy dancers were used to cover this up, he can't co-ordinate his arms at the same time as his legs and could have covered this up better, with a less 'bare' stage and costumes.

Overall, I think we are putting too much pressure on whichever male artist is in charge of attracting the young girl fanbase- they are not always going to be the next Elvis. There needs to be more coaching to nurture their voices as their anatomical structure changes, so, like Bieber, the voice is nurtured when it breaks, so it can sound richer. I'm sure in a few years time when Bieber revamps his image, his sound could be a lot stronger and not just on the verge of talking, with a little bit of harmonising. Maybe he just had a long day?

At the end of the day, I don't think I would've paid as much as the crowd did to see this event. Although I have decided that I will be seeing concerts A LOT more often! Would he have nearly sold out the arena if he was average looking... well that's another debate, as a society do we automatically elevate aesthetically pleasing looking people, regardless to their talents?

Completing your Arts Award? Remember you can review any arts based event, like I have here for your Unit 1 [Silver], Unit 1 [Gold] and Bronze. 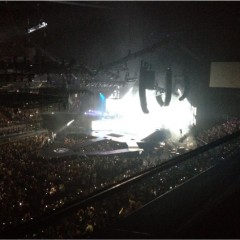 Justin Bieber has hit the UK with his 'Purpose Tour', but what did Arts Award Activist Kheira think?