Kapuściński's reportage is transformed in a poignant theatre play.

In collaboration with the Young Vic and Les Théatres De La Ville De Luxembourg, HOME MCR presented a new original theatre production. Ethiopia's Emperor Haile Selassie, who died in 1975, is commemorated by his numerous servants. The cast is composed by Kathryn Hunter, who incredibly transforms in different characters in a blink of an eye, and Temesgen Zeleke, a great musician who, playing the kar, brings on stage a whole tradition of Ethiopian rhythms. The play offers an adaptation of The Emperor, a book by the journalist Ryszard Kapuściński, who went to Ethiopia to witness the end of the empire.

Adapting Kapuściński for the theatre must be not an easy task at all. However, the characterisation of the servants are as poignant on the page they are when stunningly brought to life by Hunter. She let her body do the talk. After having already witnessed her ability of portraying different characters, such as in Kafka's Monkey, she reaffirms her mastery in changing posture and modulating her voice. From the servants emerge a world of contradictions. Very often the truth is unspoken, but it slowly emerges behind the lines when famines and riots strike the Ethiopian empire.

The play maintains the documentary aspect of Kapuściński's work. It mixes acting with videos and interviews. The words hit the audience as we were transported back in time, during a period of poverty and civil war - not very different from the current situation. It appears as a historical document but is enhanced and amplified by the theatre performance. The Emperor is both an important reminder of a reality often unreported by international news and a great homage to an outstanding piece of journalism.

The Emperor is performing at HOME MCR from 28th September to the 8th October. 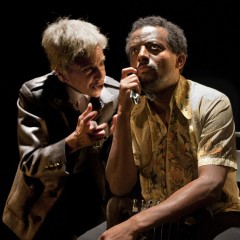 Kapuściński's reportage is transformed in a poignant theatre play.