Ever wondered what happened to Lydia Bennett in Brighton? Natasha Farrant talks about her retelling and extension of the youngest sister in Pride and Predjudice.

Natasha Farrant and her publisher have truly gone all out for this event, dressed in period costume, complete with bonnet and top hat.

Farrant is an established author who received a commission from her publisher, Chicken House to try to create a story around the youngest Bennett sister from Pride and Prejudice, Lydia. Farrant decided to seize the opportunity, but nevertheless describes her nervousness at attempting to use the characters of such a well-known and loved author.

Her driver for the novel was the question of what happened to Lydia during the missing month that she was at Brighton. While Lydia is central to the plot of Austen's most famous novel she features in it very little, and has built a reputation for being the wayward youngest daughter. However, Farrant sees her more as courageous, with an appetite and energy for life and new discoveries. She points to Lydia's first spoken line: 'I am not afraid, for though I am the youngest, I am the tallest,' suggesting that this illustrates a different side to Lydia's character, one which is often neglected.

Is Jane Austen a feminist then? Her publisher asks. Probably not by today's definition, explains Farrant, but a central aspect of Austen's work is to create very independently minded female characters, who are willing to make their own choices, and often difficult ones in the context of the time, as women were expected to have little choice or independence. This is something that Farrant thinks is incredibly important even today, with modern day culture and society often still putting pressures on young women. It is clear that this is an aspect of Austen's work which Farrant has kept alive through her representation of Lydia.

Farrant evidently did a lot of research on the time and places in which her novel was set, describing the intricacies of fashion, dancing, and most significantly to her novel the advent of bathing, as her novel is set in Brighton. It is fascinating to hear Farrant talk about these subjects with such passion, and readings from her novel confirm that she has secured a modern style which respectfully invokes Austen. It was wonderful to see the number of not only old Austen fans in the room, but also teenagers, illustrating that Farrant has successfully attracted interest in these characters for younger readers. This event was incredibly interesting for any fan of Austen and has made me eager to get to know Farrant's Lydia Bennett. 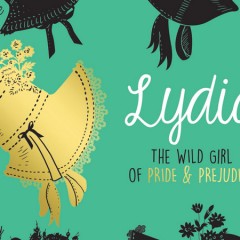 Ever wondered what happened to Lydia Bennett in Brighton? Natasha Farrant talks about her retelling and extension of the youngest sister in Pride and Predjudice.