Who is Roald Dahl's worst villain? We found out at Bath Children's Literature Festival

The hall was packed for Roald Dahl's Most Villainous Villains debate, with plenty of the author's fans both old and young alike. Celebrating the worst of the horrible villains in these popular children's stories were a series of children's writers, including Anna Wilson, Katie Thistleton, Guy Bass, and Jeremy Strong, each arguing that their villain was the worst. Chairing the debate was Blue Peter Presenter, Lyndsey Russell, who was keeping the authors in check. The panel was supported by two large screens which were used throughout the debate to show an animated introduction, as well as profiles and illustrations of the villainous characters, and the trailer for the new BFG film.

The choices of villains included the terrible Mr and Mrs Twit, the horrifying Grand High Witch, the gruesome Giants, and finally the terrifying Miss Trunchbull. Each of the authors were given a chance to argue their case, each describing how horrible their villains were and all the awful things they had done. The audience had to boo to show just how villainous these characters were and it wasn't long before the room was filled with passionate booing for the different characters, with Miss Trunchbull taking a strong lead.

This was followed by a quiz and then a quick-fire question round, in which the authors were asked Roald Dahl related questions. While all the authors did well, it was the audience who were the most impressive when Russell asked us if the answers were correct the responses were overwhelming; these kids really know their Roald Dahl! Next came some questions from the audience, offering some great interaction and entertainment, with some testing questions for the authors on the subject of Roald Dahl's books.

At the end of the questions and quiz round Guy Bass's Giants were looking particularly villainous. However, after a quick 30-second plea from the authors, all of the booing was taken into account and the scores totted up to reveal that the awful Mrs Trunchbull is indeed the most villainous villain.

This event was fun, interactive and entertaining for any Dahl fan, young or old. It was incredibly engaging with plenty of audience involvement and was a great way to explore some of Dahl's less well-loved, but nonetheless brilliant characters. 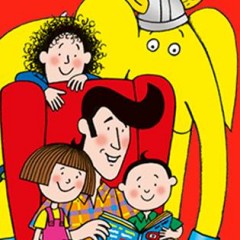 Who is Roald Dahl's worst villain? We found out at Bath Children's Literature Festival