New play by Theresa Ikoko about gender, race and sisterhood during civil war in Africa.

Three girls have survived a civil war conflict, but are subsequently kept as prisoners by Boko Haram. A touching and powerful story of friendship that forms from the horrors and traumas of the war. Theresa Ikoko sets her new play among inspiring dreams for the future and the hardships and fears of the present, in an incredible portrayal of the world and its most controversial issues.

In this play there are so much food for thought that it is hard to contain everything in few words. It is a play about gender, what does it mean to be a woman and feel violated while also witnessing terrible genocides? It is about sexuality and motherhood, what is like to carry the child of he who is supposed to be your enemy? It is about religion and beliefs, what kind of God would answer to your cry for help? It is about race and media, what is left of yesterday news and of trendy hashtags to show support during civil wars?

Every characters bring on stage a different point of view to communicate that there is not clear and univocal answer to those questions. The three girls find strength in each other, they dance and sing, they share emotions and ambitions. They reclaim their place in history and fight to survive in a mix of adaptability and pride. Their bodies don't have additional value just because a man desires them. They wash their scars and plait their hair facing one day after the other.

The performance wouldn't be the same without a group of very talented actresses: Yvette Boakye, Abiola Ogunbiyi, and Anita-Joy Uwajeh. They bring on stage a very intense performance, both in the traumatic moments and in the joyful ones. The sounds of their voices singing can easily fill the room, while conveying the importance of friendship in the story. This play is clearly the gem of High Tide festival!

Girls is performing at High Tide Festival in Aldeburgh until the 18th of September. 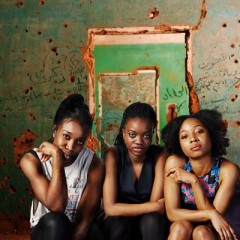 New play by Theresa Ikoko about gender, race and sisterhood during civil war in Africa.