Jellyfish puts on stage the portrayal of a generation: mislead by promises of a successful future, graduated but unemployed, skint and alienated by society

Back and forward, mixing the past with the present, Alice Malseed tells her story, from growing up in Belfast to moving to London. It is a personal narrative, but also representative of an entire generation. This is a generation enchanted by promises of successful lives and careers. Pushed through education with high expectations: they work very hard on three or four minimum wage jobs to try to survive in London, while waiting for their big break.

The audience witness destructive drug highs, the character feeling invincible and dancing her life away, and her powerless and disillusioned moments, in over-crowed rubbish-filled flats. This is the expression of discomfort and confusion that can't be avoided. There is no shaking it off.

The performance alternates between slow-paced story telling moments and fast eclectic monologues, such as furious rapping and moments drowning, desperately trying to breath. Symbolic gestures create a dreamy atmosphere. She slowly lights and burns matches one after the other. The smoke is a simple but poignant element that represents a confused vision and dream about society and the world around us. The loop created both by the gestures and the repetition of words traps everybody in: "I went… we went… ", old pictures are ripped off and thrown away as memories we struggle to make sense of.

This brutal and honest portrayal of a generation is truly captivating.

The Jelly fish was performed at The Theatre Box on the 10th of September as part of HighTide Festival 2016. 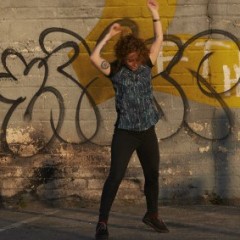 Jellyfish puts on stage the portrayal of a generation: mislead by promises of a successful future, graduated but unemployed, skint and alienated by society