The Brolly Project is full of surprises; an incredibly touching reading staged at High Tide Festival. Five performers face the audience ready to start. Initially, the voices mix by alternating in a harmonic way. Fragments catch the audience's attention, from peculiar stories of individuals, they finally merge in a single voice.

Every performer narrates his/her story, while also expanding on broader issues: cuts to the NHS, political satire, gender stereotypes, moral boundaries, relationship definitions, drug addiction and minimum wage jobs. Every topic is mixed and incorporated in a coherent and personal narrative. The script is well written and the performance intensively moving. The reflective style of the script enhances and gives dramatic power to the sex workers' stories. These different voices are self-aware of their conditions, but they also don't stop here and they don't end up only looking at themselves.

The performances were very touching and there were moments with spontaneous expression of feelings. We shared with them both laughter and tears, from one to the other without the presence of awkwardness. Their voices must speak. They can't and don't want to represent every sex worker, but their personal contribution is equally important. While they share their experience, they show pride and courage, but also pain and vulnerability. While one narrates his/her experiences, the eyes of the others mirror and amplify the emotions as part of a deeply felt community.

Telling your story is not about finding support and being reintroduced in the "normal" and well-behaved society. They don't want the patronising tolerance provided by the police, such as when a female police officer suggested one change her career. Telling your story is about finding support in others who might have felt the same, who partially share your experience and partially not, who laugh and joke with you in a healing process.

A brave and outstanding performance with a great impact.

The Brolly Project was performed at The Garage Gallery on the 10th of Septeber as part of HighTide Theatre Festival 2016. 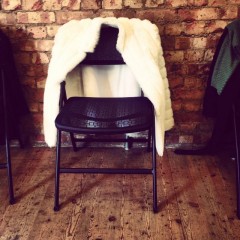