The mind-bending, astonishing ingenuity of Colin Cloud is back for another sell-out Fringe run.

The award-winning forensic mentalist took a packed out Cow Barn, Underbelly Med Quad and astounded us with the talent he has to read the mind. You will try to figure out how he accomplished what he did and you will fail. You will wonder if it could possibly be pure chance and you will be wrong.

His Glaswegian charisma only adds to the charm of the routine. Continually compared to the suaveness of Cumberbatch's Sherlock, he will distract you into realising that every trick was clear. Cloud represents a performer a cut above the Las Vegas showmanship of similar acts. This time, he also reveals how he did most of his tricks in a segment that makes you feel thicker for knowing how easy it was.

The first half an hour was surprisingly slow. When we get further into the show, the tricks become more exhilarating and altogether more unique and this makes us see how we could have been feeling for the entire show. The heart racing, spine-tingling shock and awe that comes with later tricks needed to be used more relentlessly throughout the whole show. This feeling does not become boring. Each trick needs to have us cry witch.

This along with other tricks later in the show redeems the whole thing. There is smooth audience interaction and consistent dropped jaws and shivers. He managed to extract some of the most embarrassing things that humans could do, think, and even dream, and the impact comes from the fact that Cloud gets them perfectly right in addition to just how embarrassing they are. All said and done, he concocted how to make the audience act in order to reveal what we're thinking and it's to this showmanship that this show owes its success.

Remember in Ghostbusters, when the next think any of the crew thinks of will destroy the world and Ray (Ackroyd) accidentally thinks of the Stay Puft marshmallow man? Well, be careful what you think.

Colin Cloud: Exposé is on at the Cow Barn, Underbelly Med Quad at 21:00 until 28 August. For tickets and more information, visit the Fringe website. 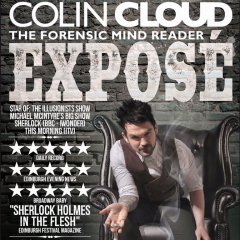 The mind-bending, astonishing ingenuity of Colin Cloud is back for another sell-out Fringe run.