Geeks and fan gather to argue the most important questions in the galaxy – Star Wars or Star Trek. Rik Carranza hosts a debate on a topic that divides people more than a Manchester derby match day.

The comedians featured were James Nokise for Star Wars and Bethany Blue for Star Trek, James started off with a strong opening argument but didn't compare to Bethany's entrance as she walked on stage wearing a red star trek uniform with a Stormtrooper helmet. Some would call that blasphemy, Rik Carranza put it best when he said "that's the true meaning of cross-dressing" - in geek of course.

Through 5 rounds it was an even game, with both comedians giving their best to win each round. In the end star wars won.

It may seem like a niche thing to go to at first but it doesn't take long to get caught up in the debate yourself as some of the audience members themselves were arguing over which JJ Abram's film is better.

It was an enjoyable experience, it was good to see fans and non-fans in a room the political matters in the geek world and the show was different to the usual stand up you'd find at the fringe. Rik himself as a host was funny and charming and brings a good line-up of comedians who know there stuff.

So whether you're a trekkie or you believe in the force, not at all it's still a good comedy show. 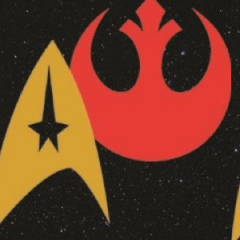