From Kill The Beast, a young creative company associated with the Lowry, an original musical play mixing sci-fi and humour

The King Dome has been transformed in a sci-fi universe, where neon lights and oleographic projections brings the setting of the story to life. After a tragic happening and the cancellation of her TV programme "The Crystal Continuum", Juniper Berry has retired into a peripheral block of flats. We follow her adventure, as an eviction notice arrives to her door. An unknown monster lives in the basement and everyone is in danger. Flashbacks from her past slowly emerges in this as mysterious and hilarious play.

Cartoon-like and electro tunes are original to the production. From the silly and catchy "Captain of My Heart" to the sharp and satirical song about the City Council, the audience is magnetised by the rhythmic choreographies and the clever use of three moving panels. Different narratives intersect with each other in a fluid movement. The action moves from the past to the present, from the top floor in the penthouse to the basement of the block.

An ironic and experimental musical play, so entertaining with no chance to get bored.

Kill The Beast: Don't wake the damp is at 15,00 at the Pleasance Dome until the 29th of August, 26th excluded. Tickets and full details here. 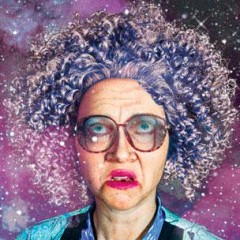 From Kill The Beast, a young creative company associated with the Lowry, an original musical play mixing sci-fi and humour