Rachel Owen reviews 'Ginger is the New Black' by James Wilson-Taylor - a comedic exploration of gingers and their historic struggles.

James Wilson-Taylor is clearly a very funny man. I compiled a list of things that made me laugh from his one hour show – it fills most of the page. The range of topics he covered was phenomenal. From pop stars to politics, dating to Disney, Wilson-Taylor managed to twist them all to joke about his favourite topic – being ginger.

We took a look at some high-profile gingers of the past and present such as Rick Astley and Prince Harry and what impact they have had on the public perception of gingers. This included an excerpt of Astley's hit single, 'Never Gonna Give You Up', which made me question as to how I had managed to end up in a situation where I got rick-rolled in 2016. My favourite skit in the show definitely had to be 'Hopkins or Hitler' – a game show were Wilson-Taylor read out quotes and picked on members of the audience to guess whether they were quotes from Katie Hopkins or Adolf Hitler, which was more difficult than it sounds! Other highlights worth mentioning are the new Justice for Gingers movement (a subject he clearly cares deeply about), the Pirate Tindr joke (apparently one of the best jokes at the Fringe this year) and debunking Donald Trump as a ginger (we all already knew it was a wig though, right?).

There was a variety of hilarious sketches throughout the performance, most of which came in the form of songs including an Ed Sheeran parody (which was brilliant), a song about his colourblind girlfriend and a brilliant grand finale . These songs worked extremely well and broke up the show so it wasn't just one hour of stand-up comedy. However, one of his songs just didn't work for me. Maybe it's because Harry Potter was my childhood but I felt that trying to get us to participate in the 'Sex Ron' dance was possibly a step too far. Looking round at my fellow audience members, it seemed as though a lot of people were laughing at the awkwardness of the situation and not because they were enjoying it too much.

But really, that was the only thing that let a very enjoyable hour of comedy down. Wilson-Taylor spun what could have been a very niche topic into an engaging show that touched what felt like every aspect of modern life.

Ginger is the New Black definitely entertains and I would whole-heartedly recommend to comedy fans regardless of whether they love or loathe gingers. 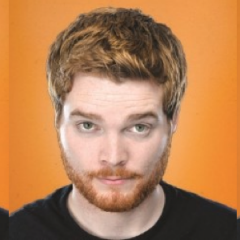 Rachel Owen reviews 'Ginger is the New Black' by James Wilson-Taylor - a comedic exploration of gingers and their historic struggles.