Improvised puppetry – what more could you want?

The Omnitorium, Assembly George Square, is home to Flabbergast Theatre favourites including Voice's Pick of the Edinburgh Fringe special mention act, Tatterdemalion. Down there, the weird and wonderful emerges and wows circus and cabaret lovers. Boris and Sergey are the stuffed stars of the show, powered by three Flabbergast Theatre puppeteers each and voiced by the human versions of themselves.

The sassy and reckless pair takes suggestions, props and participants from the audience to help shape their show. Except, at a certain point, they stopped getting the audience involved.

The audience bestowed onto them an enormous amount of props for them to use of varying delicacy and value and this made for a great deal of material. The puppets go on hilarious, unpredictable hijinks and Boris and Sergey deserve every credit for creating the ensuing hilarity.

Not only all of that, but their puppetry alone is very impressive, down to the slightest of movements. Perhaps more could be done to hide the puppeteers themselves and truly make the puppets the stars.

Like I say, improvisation is only used to an extent. There's one use of audience participation with a front row audience member that has happened in more than just my version of the show. They began taking it upon themselves as to the direction of the show and less from the audience, which may have been due to time but the Saturday night audience I was in was all too eager to get involved. Getting the audience to voice the puppets would be a way to maximise the improvisation.

Overall, the merit is there – it is hilarious and an undeniable spectacle – but they need to play with the extent to which they experiment with improvisation.

Boris & Sergey: Preposterous Improvisation Experiment is on at 21:00 at the Omnitorium, Assembly George Square Studios until 28 August (exc. 16 August). For tickets and more information, visit the Fringe website. 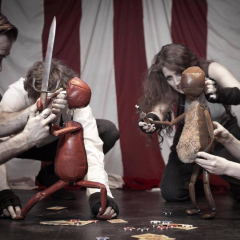 Improvised puppetry – what more could you want?