A spectacular and vibrant dance piece with stunning effects

Choreographing as well as performing his own show, Carl Knif presents a deeply emotional performance inspired by difficult moments from his own life. The performance deals with themes such as mental health and sexuality in an abstract performance.

It was a pleasure to watch Knif move, as he is a wonderful dancer whose movement is fluid and expressive, as well as constantly engaging. Opening with slow movement as he places candles between his fingers and toes his performance is captivating and he immediately hooks his audience. As well as contemporary dance, his perfomance combined movement theatrically with music, lighting, props and spoken word, beginning to narrativise the work in a fragmented and abstract way. The expression in his movement was a physical representation of words, demonstrating mental anguish.

The use of lighting was incredibly creative, from the square spotlights representing a space of 'home' to the stunning use of strobe lighting which had a spectacular effect on Knif's movement, an experience which can only be seen and not described, but had the effect of evoking fragmentation and anxiety. Equally, the spoken word pieces were simple but powerful; complementing the physical movement. The combination of art forms worked well together - allowing the piece to come together as a whole.

The work told a tale of relationships with others, with home, with technology, with faith, and ultimately with oneself. Knif picks up on themes which are relatable and identifiable, as they define the human experience. His performance is a beautiful portrayal of not only a personal journey, but the trials and tribulations of these human experiences. This show is not only for those who enjoy dance, but for anyone who enjoys artistic expression. 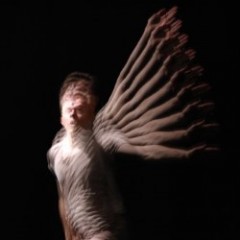 A spectacular and vibrant dance piece with stunning effects