A solo show about how values and scale of rewards change in time: from important lessons learned from her family to satirisation of contemporary culture

Don't expect boob jokes or silly faces in Maureen's show. Coming from a working class family, her parents encouraged her to pursue and cultivate her education. According to a system of values that rewards those who work hard, they tried their best to be a role model for her. Does success really come from hard work nowadays? In this show, Maureen questions the Kardashians' popularity as a symbol and model of contemporary success.

She ironically blames her parents for teaching her the wrong way. In a poignant monologue, she holds the following responsible: her father, her mother and America. Sometimes, her tone edges over to bitterness instead of the sarcasm she was aiming for, but in general this hits the right notes.

In a world where studying for an English major is already a joke in itself, she indirectly reclaims the importance of education. Maureen tells the personal stories of her parents by exploring their intimate accounts and idiosyncrasies.

An enjoyable hour of caustic humour and sharp satire on what it means for us to be a success in life.

Maureen Langan: Daughter of a Garbage Man is running at 10.15pm at the Stand Up Comedy Club 6 until the 28thof August (15th excluded). 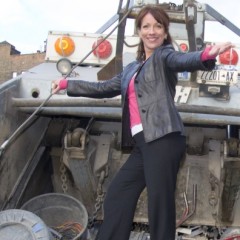 A solo show about how values and scale of rewards change in time: from important lessons learned from her family to satirisation of contemporary culture