A foot stomping, hand tapping, audio-visual extravaganza by Up & Over It.

The video art was as astounding as the actual performance. The visual art by video artist, Jonny Reed, was psychedelic and beautiful and was used to illustrate the thoughts of the characters as well as provide setting. Performers, Susanne Cleary and Peter Harding, took an Irish dance show and added to and transformed it with different genres of music, a bit of physical theatre, dance and music using just their hands and, of course, the projections.

Irish dancing has to be electronically and intricately synchronised – they took this element and extended it to the contemporary dance as well as the theatre. The proliferation of their ability to move in such tandem with each other meant that all aspects of the performance had that electricity.

All these forms mixing fluidly (pardon the pun) among each other was a delight for all the senses.

A great deal of credit belongs to the visuals team: production design and video design. From a spectatorial point of view, a lot of the projection happened a bit close to the front row for further back rows to see and some were made too dim by the ambient lighting and badly covered skylights. Suspending this, though, it was entrancing. Costume and set was profoundly otherworldly and the use of the rotary clothesline was inspired.

Great for all ages and truly beautiful.

Into The Water by Up & Over It is on at 11:40 at the Grand Theatre, TheSpace at Surgeons Hall only until 21 August. For tickets and more information, visit the Fringe website. 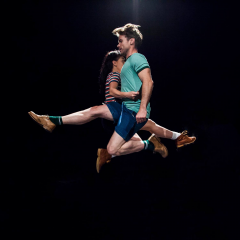 A foot stomping, hand tapping, audio-visual extravaganza by Up & Over It.