Samantha speaks against shaming women's body. Talking about her experience as an activist in the Free the Nipple campaign, she reminds us how gender equality still has far to go. She remains topless and she is also joined by other members of the audience in solidarity.

She asks the audience what is so offensive about women's nipples and put on two stickers of male ones. Women are shamed not only for their body but for their sexuality, too. We all know the double standards: a man who has sex with a lot of women is a playboy, while a woman is just a slut. People feel entitled to judge you from what you are wearing without even pondering for a moment.

Reclaiming her sexuality, Samantha tells her story. She has been trying to enter the creative industry with her own means. Not able to afford to attend drama school, especially in London, she followed her dream while working in a McDonald's in her hometown. She recalls her past adventures with different members of rock bands and her struggle with bipolar disorder.

Samantha is not afraid to hide her background or her past experience. She openly talks about it without shame, as it should be done. She briefly dances on a pole with irony and grace to conclude her show. Before doing so she takes her make-up off and puts more clothes on her topless chest. Her reminder is that being sexy is not a matter of clothes or make-up.

Samantha Pressdee: Sextremist is at 22,20 in The Mash House until the 28th of August (15th excluded). Read more here. 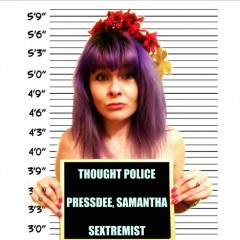