Back at it again, with his one man show.

Tom Neenan is back at the fringe with a brand new one man show about the tales of the "Vaudeville" theatre.

Different to last year's "The Andromeda paradox", the story begins with a security guard in the abandoned theatre, celebrating his birthday before discovering the audience in front of him. To entertain us he told three stories about things that had happened in the past.

Each story was unique in its own way; the first was about a magician and his puppet, the second was a Macbeth style story about a Shakespearian actor trying to do Hamlet and the third was about a dancer making a deal with the devil.

To be able to simultaneously switch from one character at another is a talent and Neenan does well to maintain the laughter. There was a part where he pointed at a man in the audience to volunteer for a trick, then sat on the man who got up as the chosen person – hilarious.

What was great was the fact that the show was self-aware, instead of opening the door he would say "door opens" as he did it. It can somewhat seem like he's breaking the fourth-wall when it's really just part of the punchline of the show.

His style of comedy worked brilliantly last year and won the audience over again this time. 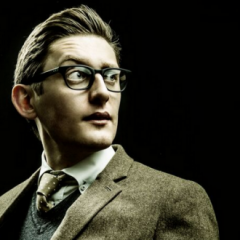 Back at it again, with his one man show.