Everyday in the Ace Dome, Pleasance Dome, twelve performers get up to three minutes each to persuade us to see their shows. Here's a rundown and the six highlights.

The room was ram packed, and for good reason: the prospect of seeing a list of great comedians without needing to trawl through the Fringe guide is a refreshing one. Even if you don't choose any of them to see – which you should but just in case – you discover some gems of raucous comedy concentrated into the three-minute limit.

Laura Lexx was our host for the show – her show is Tyrannosaurus Lexx. She was small but had a great deal of energy and managed to get what was a slightly flagging audience to start with up and at 'em. Read about what Sally thought about her 2015 show.

Another highlight was Steen Raskopoulos who was completely bizarre but everything he did and said – however pointless – was completely hilarious. His show is called You Know the Drill. Physical comedy with a level of bonkers nearing that of Tony Law's. If you ever caught him in Top Coppers on BBC Three, you'll have an idea.

Paul F. Taylor was fully hungover. His show is called Sour Apes. The absurdist comedian provided offbeat humour using everyday situations and objects and transforming them into the most surreal of stories. A lot of 'imagine if…' but in a way that makes you want to see his show.

Tom Ward – nothing particularly unique about him except his 'Lego in a tracksuit' appearance. His show is obviously called Sex, Snails and Cassette Tapes. His comedy uses random sounds and random all sorts to weave tales about the most particular everyday objects similarly to Taylor but in a more musical way. Absurd comedy with a dry delivery makes for funny times all around.

Lloyd Griffith loves football. Lloyd Griffith's show is called Is A Keeper. He is also a choirboy with a phenomenal operatic voice. Is his comedy as good as his voice? Three minutes was not enough to tell in this case but the voice is enough to go see him for.

Jess Robinson finished the show and finish it off she did. Her show is called Impressive and you should've known that already. The Voice's Pick of the Edinburgh Fringe award winner had three minutes to pull out her best impressions in her completely astonishing voice. Brilliant and an hour of this packs a massive punch, trust us.

The Fast Fringe is everything you need in the early evening – so quick and oddly exhilarating!

Fast Fringe is on at 18:40 at the Ace Dome, Pleasance Dome everyday until 27 August. For tickets and more information, visit the Fringe website. 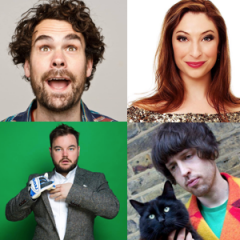 Everyday in the Ace Dome, Pleasance Dome, twelve performers get up to three minutes each to persuade us to see their shows. Here's a rundown and the six highlights.