Adams hasn't been terribly lucky in life, by her own admission.

I am the one who was brought on stage and made to look like I was doing naughty things. The first female stand up I'd seen this year in the incredible French Quarter of Edinburgh was brilliant. The poster and premise of the show was great – spoofing and comparing herself to Adele and the 25 album cover.

This show is the epitome of self-deprecation. Adams takes us through her entire life re-enacting some of the most hilarious bits and retelling how much better her sister always was than her. So much of the storytelling is so compelling and funny that the stray gags that might've stumbled didn't matter. During the audience participation, the audience was in crying fits of silent laughter.

The expression of her face carries so much of the humour effortlessly. She uses music and film from different parts of her life to illustrate the ideals of how she wishes things had gone. How embarrassing some of her stories are made the teeth itch with discomfort.

Towards the end there are two of the most unexpected turning points fathomable. One of them veers the course of the show in a completely different, heart aching direction, and the other is both touching and vehemently impressive. The multi-talented Adams tells us not to compare ourselves to other people too much and that originality is paramount.

Dangerous, mouthy, and a comedy must-see. Her voice is impeccable, her wit is inimitable, and her voice beautiful and she deserves a rapid upward trajectory within British comedy.

Jayde Adams: 31 is on at the Voodoo Rooms at 22:30 until 28 August (exc. 17 August). For tickets and more information, visit the Fringe website. 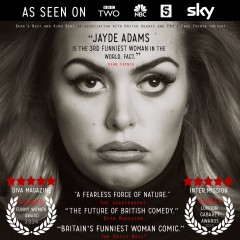 Adams hasn't been terribly lucky in life, by her own admission.