An interesting idea but trying to do too much at once

An open set of random objects in a studio set the tone for the whole show. It opened with a song, while one man smashed a wooden chair to pieces. The remainder of the show tells the story of various unknown artists who have made buildings from odd objects, using projectors at the back for images and video clips.

However, far from feeling like a lecture, the show was interspersed with songs that are supposed be quirky but just end up being gimmicky, as they're linked to the content that preceded them and had no overall aesthetic direction, adding to the mishmash theme of the whole piece that just didn't quite work together. Moreover, as they invited someone in to make something during every show, there was the sound of chopping wood over the top of the rest of the show.

The show tried to be a random mishmash of things which ultimately failed - there was no rhyme or reason for Weetabix boxes, pants down gags or riding on a child's bike. The show did incite giggles and claps from the audience, although it often felt like we were laughing at them, rather than with them and sometimes the restrained applause felt polite. The problem was that the show, not unlike their dad dancing, was just not as funny or enjoyable as they thought it was. While we did eventually discover that the mini sculpture that was made from chewed bread did have quite a profound point to it, it was slightly nauseating and honestly not entirely necessary.

Redeemed slightly by the interesting aim of bringing unknown artists to light, the show simply lacked cohesion for a premise which had a lot of potential, meaning it became more interesting for the art it discussed than as a work of art in itself. Ultimately, the show had an interesting concept but failed to deliver, making it more bemusing than amusing.

The Castle Builder is on at Summerhall at 12:55 until 28 August (exc. 15 and 22 August). For tickets and more information, visit the Fringe website. 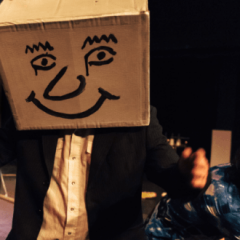 An interesting idea but trying to do too much at once