Opening with coconuts and an elaborate costume of a dressage horse, it is evident that Elf Lyons has a style of humour that can only be described as wacky. One of her first jokes an impression of an MRI machine. Despite this sounding a little insane, it is actually incredibly amusing.

Her comedy is quite like that of Miranda Hart, but with knobs on. Her entire show revolves around her relationship with her mother, recalling personal, whether true or not, anecdotes and creating an almost unimaginable mish-mash character through different tales, comparisons and impressions. She tells us that she is bad at accents and exploits this.

For all of her outlandish wackiness, Lyons is immensely identifiable - she is like the little voice in your head but times ten, which makes it far, far more funny. However, her kookiness can occasionally be a bit too much, with one particular section where she describes her mother as the ocean tipping over to the point of shouting a long series of lines. While this was the point, the level of shouting was just a little over the top. Finding some balance would definitely benefit her here and she wouldn't need to compromise the energy she brings either.

Lyons had a great reception; the whole room was laughing. Her ability to make intensely personal and potentially even serious topics funny was incredibly impressive. Even so she wasn't afraid to broach the more serious topics, and when the audience clearly felt more uncomfortable, she explained that it was completely ok, and that these are subjects we need to talk about.

Lyons is brilliantly funny, and her humour is quirky, and a little bit silly but very fun. She is definitely one to watch so catch her on the Free Fringe while you can! 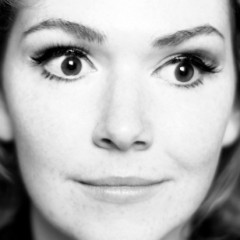