This show can only be described as the Irish equivalent of The Lonely Island, Rob and Sam freestyling from everything and anything the audience throws at them. The pair are back again at the Udderbelly stage for an amazing night of rap, music and laughter. These are the life and rhymes of Rob, and his story as a successful rap artist in Ireland and his search for his estranged father. Rob and his friend Sam joined to form Abandoman to become the 'best in the game'.

Apart from the scripted narrative, most of the gags they perform are completely spontaneous. The level of energy in this performance was high from the beginning and got the standing ovation it deserved. If you like getting up on stage and joining in the fun then this is the show for you.

It was amazing how they were able to make the best out of some of the most random things and they quickly came up with some pretty good rhymes and references; there were stories of McDonalds, going to New York to be a finance manager - sounds dull, it gets much weirder. There was a song about having an addiction to all types of nuts and how Pikachu (a guy in a Pikachu onesie) helped him through his addiction. With these guys, the weirder the better. 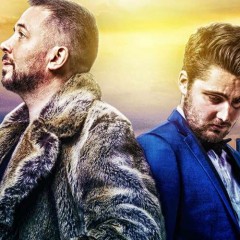