Sharp tongue comedy wins over the audience. A mix of glitter, sarcasm and songs.

On stage, Myra DuBois behaves like a star. She has named her fans with a unique name Ad-Myras, like Lady Gaga with her monsters. She requests big applause from the audience in order to start her performance. Her self-confident attitude and caustic humour magnetised us, even with her most acid observations.

She is a great entertainer and brilliantly interacts with the audience. Once such example is when Myra plays her own version of the card game Higher and Lower with us. Political satire fits in among the jokes, while the fortunate victim has been chosen to play with her. She mocks the audience and tells funny anecdotes from her hometown. Apparently, it is the only place with a Burger King inside the hospital.

Myra is not only funny, but also an absolutely drama queen. She performs her own tragic poem with pathos and irony, never missing the chance of teasing us and always answering back. Good evening of fun with a majestic hostess. 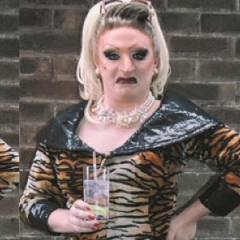 Sharp tongue comedy wins over the audience. A mix of glitter, sarcasm and songs.

Why the arts should be taken more seriously.