Millerick is a man I would love to be friends with, the kind of bloke who would always be up for a pint at the pub – at least he would have been, before he discovered Amazon Prime Now. He is funny, friendly and has some amazing stories to tell, and what's better is that he tells them well.

His show is centred around a documentary he was commissioned to make about ballroom dancing lessons being delivered to underprivileged children in Birmingham. At the time he was 26, and had visions of becoming the next Louis Theroux. He is no longer in documentary making…

Before that he was contributing to the global economic meltdown by filming rap videos for bankers, inflating their egos beyond an already unhealthy level. And before even that he was following a camera man around stage on Reading Festival, making sure they didn't trip up on wires. As a result, he ended up getting locked in a shipping container by Eminem. All in all – quite an exciting CV.

Deciding to do a show on the hellish documentary production was both a fantastic and slightly bad decision. On one hand I am glad that he decided to talk about it, because it sounds just the kind of god awful circumstance I love hearing other people having to endure. Equally, it really did serve to highlight just how underfunded schools are, and the failure of councils to provide an effective solution to them.

On the other hand though, even I can only take so much gloom before becoming angry at how inefficient the education system is. Millerick's constant shouting, although justified, does start to grate, and it's no wonder he is starting to lose his voice. He really did not need a microphone.

Millerick is naturally very funny, and like I said, someone you would love to go to the pub with, but there is only so much you can do with the chosen material.

Tickers and more information can be found on the EdFringe website. 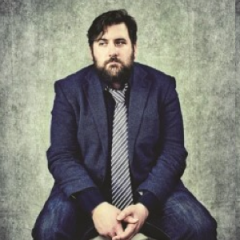 Garrett Millerick: The Dreams Stuff is made of