Back with his signature brew of irreverent and flawless tomfoolery.

What is Tony Law? Whatever are his shows titles? He tells us that, normally, he is put in the miscellaneous section of the Fringe but this year is finally in comedy.

Voice's Pick of the Edinburgh Fringe winner is the king of comedy without a cause. He appears to carelessly digress onto the wildest of tangents and openly struggle to return to any train of thought. That train of thought is always as ridiculous as the digression.

The fearlessness of letting us know how badly he was going off topic is a massive part of his appeal. Either that or he's a genius for scripting these reactions. The way he does it is just random. He might eat his mic, have a chat with his rabbit, or just stop and lunge.

Some of this might not sound like the most interesting of shows but the way in which all of this madness is exhibited is in the most inventive and joyful way imaginable. He seems like he's falling apart, but that's fine because he does it absolutely brilliantly.

Want something that isn't deep or political but just plain old mad? Cheek-aching laughter? Tony Law is your best bet.

Tony Law: A Law Undo His-elf What Welcome is on at the Rainy Hall, Assembly Hall at 20:00 until 28 August (exc. 15 August). For tickets and more information, visit the Fringe website. 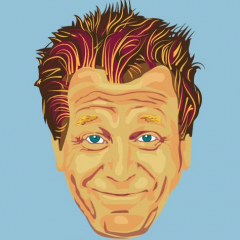 Back with his signature brew of irreverent and flawless tomfoolery.