Club owner George and lodger Nick are forty-odd year old men who are trying to make sense of their lives and do something with them. Immediately we see the Hawaiian shirt wearing Nick is irresponsible - an unconventional artist who sleeps with women half his age, he relies on his 70 year old Dad to sort everything for him. However, for all of the judgment that the seemingly straight laced suited up George lays on, it becomes clear that Nick is not the irresponsible one - in the typical style of a 90s gangster show, George owes a lot of money to a man named David Sharkey, and the duo are in big trouble if they can't repay.

Told only through scenes featuring Nick and George, we get a full narrative of what occurs, with scenes cleverly jumping in time and space to show us only interaction between the two, yet building a fuller picture of the wider plot and world surrounding them. This is no mean feat to do through solely using dialogue, but the piece is so well written that it stays interesting, active and engaging, making as much use of silences as the words that are used. The dialogue not only sets up a full plot line, with dramatic plot twists, but an exploration of each of the two men and the relationship they share, as we discover they have constantly been lying to each other, and share much more than was ever anticipated.

The show deals with deep issues about men in particularly pressurised environment - with the legacy of the Kray twins still overhanging London and the looming Millennium approaching - both men have had hugely different experiences, with Nick evidently still affected by his experience fighting in the Falklands, while George did time and lost his family. As both men begin to open up, the amusing, bravado attitudes are peeled back and we see these men left bare and vulnerable. A brilliantly written piece, the show was engaging, dramatic, darkly amusing and thoughtful; a fantastic original show.

The Club is on at 17:00 in the Gilded Balloon at the Teviot until 29 August. For tickets and more information, visit the Fringe website. 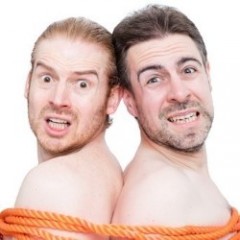