This outrageous lady of pride and power decided to make a visit to the Fringe and talk about herself.

Honestly, that's all it was. Lady Colin Campbell, who was once a famous "celebrity" herself in the 1980s, has been revived in 21st Century due to her appearance on the British reality game show I'm a Celebrity - Get Me Out Of Here in 2015. Her appearance at the Fringe is where she tells the audience about her childhood, her marriage, and her opinions about I'm a Celebrity.

Whilst she wasn't as "outrageous" as she was on the show, Campbell seemed a little bit pretentious. Of course, she didn't have an easy life - she revealed the problems of being a child growing up in the wrong body and her manipulative and abusive husband, Lord Colin Campbell. Lady C made it very clear that she is woman with pride, and keeps her head held high.

However, if I wanted to hear someone talk about themselves for an hour, I'd attend a lecture at a university. That isn't to say that I didn't care about her past life struggles, as it's always hard to hear about someone who had an awful time growing up, it became particularly uninteresting as time went by.

If you're a fan of I'm a Celebrity and are even a tad obsessed with the woman wearing a tiara, then I recommend this one-woman showcase.

A Cup of Tea with Lady C is appearing at the Gilded Balloon Teviot (Venue 14) between August 9th - 28th (excluding the 16th) at 15:00. For more information, please visit https://tickets.edfringe.com/whats-on/cup-of-tea-with-lady-c 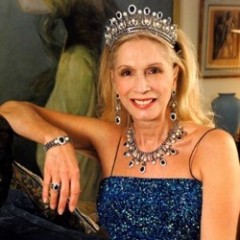 A Cup of Tea with Lady C

This outrageous lady of pride and power decided to make a visit to the Fringe and talk about herself.