Whilst at first it was a bit odd and seemingly just medical industry jokes, this comedy show turned out to be so much more

Using a piano to play popular songs and replace the lyrics with yet more medical humour, Adam Kay was able to get the giggles going with disgusting mentions of blood and a crude quality to it at the same time, especially his rendition of Hallelujah.

Of course, it didn't stop there - Kay also read his old notes from his time as a young doctor working his way up for the past decade. Whilst at points it was awkward and hilarious, there was one particular entry that completely broke my heart, and explains the life choices he has subsequently made. He also made a poignant speech about junior doctors and the respect they deserve.

Now, the humour was definitely there - it was funny, disgusting, awkward but surprisingly relatable! But, his constant switch between medical notes to medical reprises on the piano just came off as a bit random at times, and there were moments where I didn't really see the point in having the piano there in the first place. However, as the jokes got cruder and funnier, I became glad that the piano got the spotlight.

For the rest of the show? Well, with the theme being medical, there were certain jokes which I didn't quite get - and I could say the same about some members of the audience. As I said, he managed to quickly catch-up with us in terms of humour, but his poignant speech at the end of the show really changed the mood, and all of the sudden it became political. I understand his viewpoint, and Kay had a very good point, but did it really need to be there? I just feel like it didn't really need to be a part of the show. It was a bit of a mood killer, in my opinion.

Regardless, it was still a good show. The humour was certainly alive and kicking, and the flow of the routine, whilst a bit random at first, came into full force by the end of the show. If you're a GP, a doctor, a nurse or you have anything to do with the medical industry, I recommend this show, but even if you aren't there is plenty to enjoy! 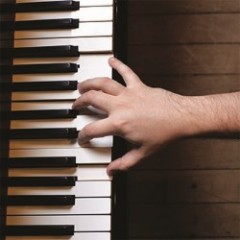 Whilst at first it was a bit odd and seemingly just medical industry jokes, this comedy show turned out to be so much more