Michelle Woolf's introductory announcement was just herself, very candidly, welcoming the audience and telling us 'I just want to make people feel things', and she certainly does.

As an American comedian it might seem fairly inevitable to go straight for American politics, but Wolf brings a fresh perspective with razor sharp wit that focused more on the Clintons, despite not only the obvious choice of Trump but her self-professed love for Hillary. While her humour was mocking and witty it never delved into scathing or serious critique, despite traversing the rocky ground of politics.

Wolf is unafraid of touchy subjects, comfortably covering politics, terrorism, gun violence and happy to critique the varied priorities of the modern-day feminist movement. Without ever moving into dangerous territory Wolf is able to joke tactfully about race, gender, sexuality and she even uses a quip about a one-armed friend without running into the dangers of becoming actually politically incorrect, and always staying consistently funny. She made the humour relatable by appearing to be the person who was saying what everyone else was thinking, a method that was largely incredibly effective but sometimes more difficult to pull off with more contentious subjects.

Laughing to the point where your stomach hurts is a sure fire way of being able to tell that comedy is working and for me Wolf achieved this a number of times throughout the show. She was brutally honest; unashamedly poking fun at herself as well as everyone else. Occasionally a line would go slightly too over the top, proving a little too much or too crude for some audience members. Equally a few fairly innocuous lines just fell flat, but this didn't do too much to damage the overall atmosphere of the show.

You may not agree with her politics, or her brand of feminism, but you don't have to - Wolf is funny anyway and is able to, at least temporarily suspend the seriousness from some of these subjects. An incredibly astute comedian, Wolf mixes serious subjects with a playful approach, that absolutely works to achieve her aim: this show will make you feel something, and it is likely to be good.

Michelle Wolf is performing at Pleasance Courtyard at 21:30. Tickets and more information are available on the EdFringe website. 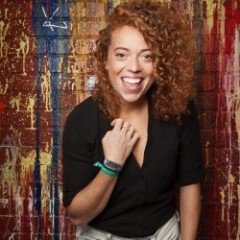