Improvised comedy in the style of Shakespeare – obviously.

If you have a cursory read of a description of Rhapsodes, you will absorb the words: comedy, improv, and Shakespeare, which might lead you to expect a comedic improvisation of a classic Shakespeare text. You would be wrong and should be glad for what they actually present.

Instead, it's an improv comedy duo performing improvised monologues and anecdotes in the styles of Shakespeare and some other legendary historical writers. It teaches the layman a bit more about the fundamentals and rules of Shakespeare's writing as well as a novel take on the writers we don't know as well. Do you want to learn something with your comedy? Yes. Did it diminish from the humour? Not enough to matter.

Most impressive was not the improvisation itself. Instead, it was the expertness with which they speak in the way Shakespeare and others wrote. As if Shakespearean were its own spoken language is what the erudition of their speech makes you imagine.

Approaching it as a competition with forfeits and punishments makes for a show with wide appeal. Without an in-depth knowledge of English literature – and they do go in depth – you can absorb the amount that matters fine.

The improvisation does, however, deserve a mention. Seldom hesitation and fluid narrative progression took what the audience fed them and used it like they've been doing this forever. An impressive display of the sheer power of the mind, if nothing else.

Rhapsodes are only on at the Pleasance Cabaret Bar at 14:30 until 14 August so book your tickets and read more on the Fringe website. 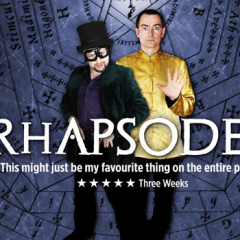 Improvised comedy in the style of Shakespeare – obviously.