Magic and comedy mix to make people cry with laughter.

The Edinburgh Fringe has started and the Pleasance Courtyard is buzzing with people, enjoying a drink before the evening shows kick off. A long queue quickly develops for this sold out show invading the courtyard. There are high expectations for Pete Firman, a Middlesborough comedian who has been performing at the Fringe for ten years. Both outside in the queue and in the theatre, the atmosphere is explosive.

Firman holds our attention with his magic tricks, but it is not only this that captures the audience. Every time he addresses us, however quickly, people shout back. He is a very good entertainer and asks several members of the audience to join in. Even people in the back are not completely safe.

For a show of this genre, you expect him to be a magician who pretends to be funny, or a comedian who improvises easy magic tricks. However, he is successful with both comedy and magic. He shifts very easily from one to the other. He holds the audience captive and plays with it. When you're least expecting, he surprises with new tricks while joking about his inability to perform magic.

Pete Firman wins over the audience and he provides a show that doesn't stop entertaining for the full hour. He joked about not being enough for the audience - he shouldn't worry, he is more than enough! 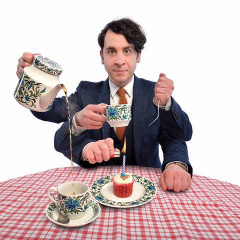 Magic and comedy mix to make people cry with laughter.