Tate Modern expands and reorganises its collection in a new building, that is itself a work of art and stimulates the public's involvement

When walking across the Millennium Bridge towards Tate Modern, in the wake of happy tourists and roasted almonds, you would not guess that the old Bankside power station is any different from before. You have to reach its south-east side to discover the newest addition to the world-famous art gallery, a 64.5m high twisting brick pyramid that goes by the name of Switch House.

Switch House, part of a £260 million project, designed by Herzog & de Meuron, the same architects who originally converted, in 2000, the power station into the gallery, opened up its doors on June 17th. It rises above The Tanks, the former oil-storage chambers dedicated to performance art, and it is, due to its shape and material, as imposing as a fortification or a ship's bow. It is pointy and irregular, or so it seems until you look more closely and discover its clever regularity and triangular harmony, how the convex walls converge into a pyramid. You notice its lightness, too; the brick surfaces are indeed perforated so as to let the sunlight get through. A bit pretentiously but to the point, Herzog & de Meuron argue in fact that architecture reflects the complexities of the human condition.

The inside is then a triumph of light, and lightness. White walls, clear wooden floors, wide and spiral concrete staircases delimit the space that hosts, over three floors, the artworks and performances, but also that in which the spectators move, and everyone really seems to enjoy this movement, their own and the others'. The artworks are in fact relatively few, and not particularly interesting, one must say; there is Carl Andre, Roni Horn, Louise Bourgeois – in other words, something that contemporary art appreciators have probably already seen at Tate or elsewhere, and the typical exhibitions that would trigger the scepticism of the non-appreciators, especially in such a great scale. But it's just so inspiring to be in a brand new space, to make one's footsteps echo, looking curiously here and there, even waiting if necessary – I stood in a queue myself to see what sat in a narrow corridor between two high white walls, despite being sure there would be nothing at all.

The art lies in the very act of searching for it, and this is in fact the whole idea behind the new building, which gathers modern art from the Sixties onwards, when artists started demanding more from the audience and their works became more 'active', often performative. The whole point of a performance, though, is that you are there, a part of it, as it happens, therefore simply displaying the 72 objects from Marina Abramović's 'Rhythm 0' is a bit of a pointless shortcut. Deprived of the performer and of the 'live' factor, the objects on the table are as provocative as an art history school textbook. A good idea, on the other hand, is that of the Tate Exchange, due to open at Switch House on September 28th as a civic space for lectures, debates and drop-in sessions, with the aim of exploring the link between art and society. 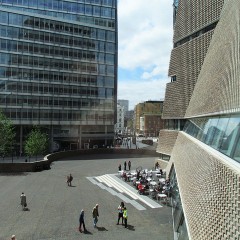 Tate Modern expands and reorganises its collection in a new building, that is itself a work of art and stimulates the public's involvement